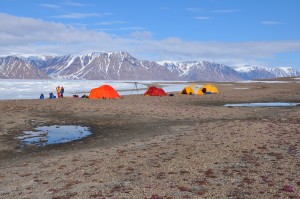 Join us on a journey of discovery to the land of the ice bear. Local adventurer Chris Cooper will recount his eighth journey to Canada’s High Arctic along with some great friends that love to explore. However, there is a twist! The average age of this group of adventurers is nearly 70, and they each hauled their own gear of 70 kg on along the Makinson Inlet, Ellesmere Island, for 30 days. This event will be filled with stories and photographs of human resilience and the marvels of nature.

The Geri-Arctics 2019: Ellesmere Island Expedition, involved four men and three women, from 63 to 75 years old, skiing and snowshoeing on sea ice around an inlet on Ellesmere Island, Nunavut, at a latitude of 77 degrees, or about 1,100 kilometres from the North Pole. Only two of the group, one of whom is Cooper, had been to the arctic before.

Chris has been in the professional guiding business for over 30 years organizing high-end custom expeditions to areas in Canada’s High Arctic and further afield. His expeditions have included: winter ski expeditions in remote areas in British Columbia and Canoe programs for Corporations, Private schools, Public schools, and ESL schools.

On March 31, 2007 Chris was inducted into the Ridge/Meadows Hall of Fame.

Chris was instrumental in opening up the Voyageur Canoe business in Western Canada and owned the largest fleet of Historical Voyageur Canoes in Canada. He has had the opportunity of being a guest lecturer / speaker to many organisations over the past 20 years.

In 2006 Chris travelled overseas on a lecture circuit to the UK to speak about his adventures and to discuss the British Isles Canoe Journey for 2008/2012.

Originally from the village of Oxenhope, Yorkshire, England, Chris moved to Canada in 1957 with his parents to Maple Ridge where it has since been his home.

His interest in the outdoors originated in the UK and has been with him ever since, this first started with backpacking and hiking in his early teens and progressed to mountaineering endeavours which has taken him around the World. Although his love for the mountains has always been with him, he took up back country skiing in the early 70s. Chris has had the opportunity to see some extraordinary places which are wild and remote – especially Canada’s High Arctic. 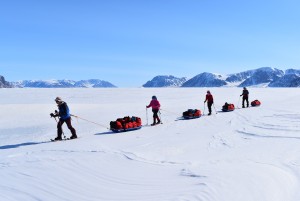 Some of these areas include several visits – on skis and kayaks – to Baffin Island, Ellesmere Island, Devon Island, Coburg Island and Banks Island in Canada’s Western Arctic. Some of these visits have been very lengthy; up to six weeks in the field and hundreds of kilometres long. His photography & films tell the story of these visits.

Chris has been involved with water sports since the early seventies when he spent some of his summers paddling kayaks around the shoreline of West Vancouver.

Since that time, Chris has had so many interesting journeys mostly by Canoe, large Canoes of 30ft in length and longer, his most outstanding challenge was in 2004 when he paddled his new 42ft Montreal Canoe from Petersburg, Alaska to Vancouver, a journey that took 105 days to complete. This Canoe was custom built for the challenges of open ocean paddling and preparing for his British Isles Canoe journey in 2008/2012. Some of the more interesting Canoe journeys are listed below.

About the Author: Site Admin